Avalanche is a map in both Day of Defeat (DoD) and Day of Defeat: Source (DoD:S). It is based on an invasion of the Italian town of Salerno. The map features many locations for Machine Gunners and Snipers for both teams. this map is very common among the many servers in DoD and DoD:S. The map was developed by Iikka "Fingers" Keranen.

Avalanche is an urban environment with a main street that connects the three main capture points with two offset on each end of the map. The map is often praised by the community for complimenting all forms of play style. The apartments benefit players using automatic weapons such as Submachine Guns, Automatic Rifles, and Assault Rifles (in the case of the Sturmgewehr-44 or StG-44 abbreviated). The apartments overlook the streets of Avalanche especially the middle capture point Fountain. There are shutters on the Axis half of the map that overlooks Fountain and is a popular location for Snipers to inhabit due to the low lighting and excellent observation of the Allies avenue of approach towards Fountain.

Avalanche features United States Army and Axis Wehrmacht]] for both versions of the game. The Allies spawn at of the map at the lowest elevation and must fight upwards towards the Axis spawn at the top of the hill. Both teams objective is to capture and control 5 flag points. Points are awarded to players who capture the flags. The most notable difference between flags between DoD and DoD:S is the Axis and Allies 1st Flag (known as Axis 1st and Allied 1st). In DoD the flag is a two-man capture and is instant. In DoD:S the flag criteria for capture was reduced to one. 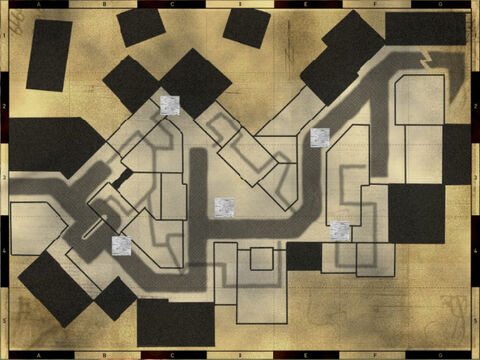 Avalanche is based off of the actual Operation during World War 2 to liberate Naples from facist Italian and Nazi German occupation in 1943. Operation Avalanche was the codename the Allies gave the Operation, which composed of United States, United Kingdom, and Canadian forces. The city of Salerno is located on the waterfront of the Tyrrhenian Sea and has mountainous cliffs and villages that scale the mountains. The plan was the deploy the main Allied landing force around Salerno with the United State's Fifth Army (commanded by Lieutenant General Mark W. Clark). Under it the British X Corps (commanded by Lieutenant General Richard L. McCreery) and US VI Corps (commanded by Major General Ernest J. Dawley).

The landings occurred in two locations: the North (a few kilometers south of the actual city of Salerno and South

The operation lasted eight days and resulted in over the Allies suffering heavy losses as German and Italian forces launched several counterattacks against the Allies in an attempt to force their surrender with their backs to the sea. On some occurrences, counterattacks from the 16th Panzer Division (under the XIV Panzer Corps) nearly reached the beaches, but ultimately came up short.

Given historical data and the terrain of the map, it can be assumed Avalanche takes place in the cliffside villages of Salerno. The game sloppily replicates what can be assumed a battle between the US Army Rangers from one of Colonel William O. Darby's Ranger Battalions and members of the German XIV Panzer Corps.

A couple of days after establishing a beachead at Salerno, the American advance towards the hills was stopped by a vicious German counterattack on September 13. Intense street fighting ensued, with some towns changing hands several times a day."

Community content is available under CC-BY-SA unless otherwise noted.
Advertisement